The following is a case-study from Dr Rizwhan Suleman (Mchiro) of Hijama Centres UK.

By Dr Rizwhan Suleman (Mchiro) and Nurudeen Hassan Bsc (Hons) MRes
HijamaCentres.co.uk
Case History
A 78 year old retired male of South-East Asian origin presents with activity based stiffness and paresthesia in his distal lower limbs bilaterally up to the knee. The symptoms are accompanied by a dull ache in the affected areas as well as in the lower back. The pain and paresthesia are described at the time on a visual analogue pain scale (VAS) as being up to 9/10. Symptoms are brought on gradually by walking for a time period greater than 10 minutes. The pains stop the patient from progressing any further in his activities and are resolved by resting for period of approximately 3 minutes. The complaint developed progressively over the last 2 years and had no known cause of onset.
Previous Medical History
The patient suffered a myocardial infarction 11 years ago that was treated with triple bypass surgery, he has high cholesterol and high blood pressure that is being managed with medication and has type 2 diabetes that is well managed with dietary control. He was previously diagnosed with anaemia 1 year ago but has since been tested and his iron levels have now normalised.
Previous Treatment
The patient saw his GP who prescribed pain medication and later referred the patient to a neurologist. After undergoing a number of investigations with his neurologist the patient was  diagnosed with intermittent vascular claudication. Surgical interventions were discussed but the patient and his family did not want pursue this line of care.
Physical examination
Blood Pressure, heart rate, respiratory rate and temperature were all within normal range. Lumbar ROM (range of motion) was relatively limited but did not reproduce any symptoms even on extension. SLR (straight leg raise) did not elicit any pain or symptoms and was within normal range. Lower limb dermatomes, myotomes and reflexes were all normal.
Diagnosis
Vascular Claudication
Treatment
The patient was prescribed an initial course of 3 treatments after which progress was to be reviewed. Treatment frequency was set at once monthly as a precautionary measure to safeguard against treatment induced anaemia and anticipating a potential for slow healing as a result of the reduced blood supply in the local area. Hijama (wet cupping) therapy was applied bilaterally to the posterior aspects of the calfs (figure A), at the proximal borders of the popliteal fossa (figure A) and para-spinally, just superior to the posterior inferior iliac spines (PSIS) (figure B). The patient was treated laying prone (Figure C).
Post Treatment follow-up
One month after the first treatment the patient described a 20% reduction in the intensity of the symptoms

but no change in the duration of onset. After treatment 2 the patient noticed that he was able to walk for over 20minutes without any onset of symptoms and described the parestheisa and pain as being non-existent. On review, after the completion of the treatment course, the patient was asymptomatic and his only limitation when walking was tiredness as a result of the physical exertion.

Note
Although the exact mechanisms of how hijama (wet cupping) therapy affects human tissues at both the local and systemic level is not objectively clear, cases like this help to shed light on the properties that this ancient medical practice holds. This information will not only aid in bettering the understanding of how and why we can utilise its application but can also help to inspire and guide the various theories that attempt to explain the very mechanisms by which we are achieving such results. 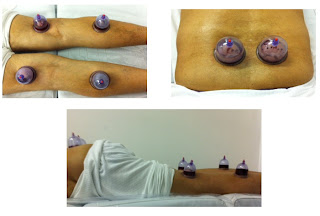 Definitions:
Intermittent claudication (Latin: claudicatio intermittens) is a clinical diagnosis given for muscle pain (ache, cramp, numbness or sense of fatigue), classically in the calf muscle, which occurs during exercise, such as walking, and is relieved by a short period of rest.

Claudication derives from the Latin verb claudicare, “to limp”. – Wikipedia