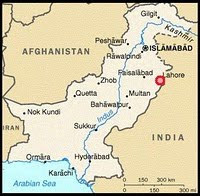 The following is a guest blog-post in the form of a written interview by Arshad Kamal, a male cupping therapist from Lahore, Pakistan.

My name is Arshad Kamal & I live in Lahore, I am running my forefather’s plastic industry business since 1970.

My father and my brother were both diagnosed with cancer & they had gone through the painful procedures provided by modern conventional medicine, and at that time, I also tried very hard for some alternative treatments but unfortunately, by the time I became aware of Hijama therapy, it was too late & both of them passed away.

In 2007, my wife was suffering from upper back pain, but she was not willing to get treatment by any unknown person. All of a sudden & by Allah’s Will, I found reference of Mr. Hasan Shami & I learnt Hijamah from him & started treatment of my wife. After few sessions, she got cured Alhamdolillah. I decided to start Hijamah at my house & I received many patients from my neighborhood that had different problems, & all of them improved.

I have had good response for all of the above mentioned diseases.

One of my patients had a motorcycle accident and he suffered with blunt trauma & head injuries, due to which his eyes had the reflection of blood clots and he felt severe headache and blurred vision, his face was swollen. I cupped him on points 34, 35, 105, 104, 101, 108, 109, Akhdain (43, 44) & Kahil (1, 55). After Hijamah, swelling on his face reduced by 80% & he felt a drastic reduction in headache, the results of Hijamah were unbelievable both for me & him.

Dengue fever is widespread in Pakistan currently, & we have treated patients with Hijamah & Tibb-e-Nabwi medicine (major ingredients as Qust al Bahri, Frankincense, Myrrh, Aloe Vera, Mugwort, Olive leaf & Thyme), the results were beyond our expectations & platelets count jumped over 150,000 ~ 230,000. We need to spread the divine medicine as our people are suffering, the expensive conventional medicine (platelet kit) is very expensive in Pakistan (40,000/- Pak Rupees), it is already short & beyond the reach of poor.

Depends on the illness and condition of the patient, but it is better to have Hijamah after every 2-3 months.

I take Hijamah whenever I feel necessary, usually within 30-60 days, it is far better to take out the septic blood quickly, instead of waiting for 3-6 months, & when you drain regularly; its quantity is reduced at every next session. And because Shifa of Hijamah is in the incisions, it is a pleasure to seek this Shifa as soon as possible. My Hijamah is performed by my wife.

After having consultation from Mr. Hasan Shami, I am doing Hijama with assistance of my collegues, Sheikh Saeed Ahmad, Sheikh Usman, Muhammad Farhan, Rehan Mian. For women, we have never touched a female & their Hijamah is done by my wife (Mrs. Shabana Arshad Kamal), & my daughter Bint-e-Arshad Kamal.

– What is the overall prevalence of hijama therapy in Lahore, Pakistan? Is it available in hospitals and clinics as a valid alternative / Sunnah therapy?

It is not very common in Pakistan, Hijamah therapists manage it at their houses, but as far as I know, there is a hospital in Sukkur which is owned by Dr. Khursheed, he has trained some of his doctors / lady doctors & has opened a special ward for Hijamah therapy where around 50 patients take Hijamah daily, Zoja Roshan Sahib is doing Hijamah in Faisalabad, Mr. Shakir Nagda in Karachi, Mr. Usman Baloch in Lahore and few other therapists in Karachi.

I was recently called by a hospital owner in Mirpur city (Azad Kashmir), where I performed Hijamah in their operation theatre & all the doctors observed the blessed therapy, they were so happy & willing to learn it further & to start Hijamah at their own.

– Where abouts is your clinic or practice located and what services do you offer?

We are offering Hijama therapy combined with Tibb-e-Nabwi (Prophetic Medicine) and food.

We have also developed molds for Hijamah cups & very soon, we shall be presenting a complete Hijamah kit that will be “Made in Pakistan”.

Tibb-e-Nabwi (Prophetic Medicine) is not the Hijamah alone, it is the combination of healing the heart & body with correct Yaqeen & A’amal-e-Salehaat, foods & herbs recommended by Prophet Muhammad Salallaho alaihe Wasallam & finally Hijamah, put them all together & have the cure for any kind of disease.

Our thanks to Arshad Kamal for sharing the above post. If
you have any questions for him, or if you have a patient of his and want to leave him a testimonial, then please leave a comment* below.