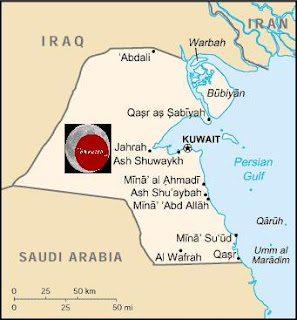 My name is Rasto Gunawan (Abu Shofiyah), 35 years old, Indonesian. Now, I am living in Kuwait working as a Nurse in Mubarak Al-Kabeer Hospital Kuwait. Alhamdulillah, I learned Al Hijamah from one of the Indonesian Al Hijamah Experts in 2007.

Hopefully, this will give us more encouragement to do Al Hijamah.

The following is a guest blog-post in the form of a written interview by Abu Shofiyah Rasto Gunawan, a male cupping therapist from Kuwait.

1. Please give us a short introduction about yourself, and in particular how you ended up being a hijama therapist?
I am a nurse. Since in the nursing college, I actually became interested in treatment based on Islamic divine revelation such as drinking honey and eating habbatus sauda (black seed) and Al Hijama until finally in the year 2007, there was one event Al Hijamah Training, in the town where I live in Cirebon, Indonesia. A qualified Ustadz named Kathur Suhardi who teaches how to do Hijama with good technique and refers to medical standards.

Since then I started doing Al Hijama for my family and friends. Amazingly the results were very good, most of them feel their fitness and wellbeing return.

One year later, a lot of friends who wanted to have Al Hijama done started coming to me and after that, usually they tell others and recommend Al Hijama as a therapy to try to overcome their health problems or at least in order to apply the sunnah of our noble Prophet peace be upon him.

I am very pleased also that Al Hijama is very closely related to my profession as a nurse. In Hospital I suggest to many patients to do Al Hijama as well as taking their prescribed medicines by the doctor.

2. What particular illnesses/ conditions (if any), do you specialise / had the most experience in?
I have treated mild high blood pressure, for example 140/100 mmHg and mild increase in cholesterol level and lower back pain.

3. And do you find that in your experience, the conditions/illnesses that you have come across respond well to cupping (hijama) therapy? And if so, what are they?
Some problems that I frequently handle include: acute and chronic headache, asthma, hypertension and hypotension, stiff neck, back pain, lower back pain, leg pain including knee problems and numbness, arthritis, haemorrhoid and allergy (food and weather).

Almost all the problems I handled shows good results, some of which in fact show a result straight away as in the case of hypertension and hypotension, after Hijama usually the blood pressure becomes close to normal BP 120/80 mmHg, even the little cases (borderline) became perfectly normal. Subhaanallah wal hamdulillah. And in the case of stiff neck, after hijama usually the patient will feel light and free, as well as patients with back pain.

But if the problem has been longstanding, the result is felt usually after a bit longer eg. about a week and some even a month for recovering.

Amazingly, all my patients in therapy, alhamdulillah, sensed something different about their bodies, they feel light and fresh, even some of them who feel lost weight after hijamah because the body feels lighter. That is how I have myself felt after my first time of hijama.

4. Also what would you say about using cupping as a general preventative therapy and how often would you recommend this (once a month? once/twice a year?)
I recommend doing Al Hijama as a preventative therapy, at least once or twice in a year and select the day and date according to the sunnah for best result. But those who have problems with high blood sugar, I recommend once every two months if doing at the same point. If someone has many problems, then it should be done every month on certain points.

In a lifetime, at least do Al Hijama once in order to practice the sunnah of our beloved prophet peace be upon him.

5. As a hijama therapist, how often do you get hijama done yourself, and what for (if any specific condition) and who do you go to to get it done (since it is not an easy therapy to self-administer)?
For myself, I have had Al Hijama done by one of my friends. It was for reducing my blood pressure and cholesterol, headache and preventative purposes.

6. What is the overall prevalance of hijama therapy in Kuwait? Is it available in hospitals and clinics as a valid alternative / sunnah therapy?
As I know, in Kuwait most of the Hijama they are doing in their private house, not in clinics nor hospitals. There are many Hijama Therapists in Kuwait but it is still not available in any hospital. We hope in the future it will be recognized and approved by the goverment. Amin.

8. Is there anything else you would like to add?
Al Hijama is one of Prophetic sunnah. I recommend to all Muslims to do Hijama at least once in lifetime as prevention. And if someone wants to do Hijama during Ramadhan, do it only if it is really very urgent/emergency, otherwise do Hijama one or two week after Eid Al Fithr for the best treatment and result.

Our thanks to Abu Shofiyah Rasto Gunawan in Kuwait, for sharing the above post. If you have any questions for him, or if you have a patient of his and want to leave him a testimonial, then please leave a comment* below.