Hijama in Singapore by Thaifoddin Othman 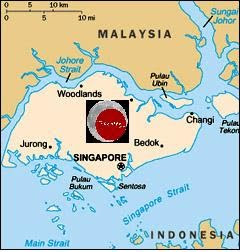 The following is a guest blog-post by Thaifoddin Othman, a male Hijama Practitioner in Singapore

– Please give us a short introduction about yourself, and in particular how you ended up being a hijama therapist

I am a practitioner of Hijama, Acupuncture, Reflexology, Reiki and Massage. I got my formal training in Malaysia, Indonesia and also my home country, Singapore. Before I got into the world of CAM(Complimentary & Alternative Medicine), I used to work in the Civil Service for almost 31 years. Over the years working in the Civil Service, I had developed acute migraine, due to work related stress. At times when the migraine would strike, I felt that my head was going to burst followed by extreme vomiting. I used to prescribe to Ibuprofen and other powerful drugs to rid off my problem only to succumb to it the next few days. After I retired from the Civil Service, the problem would still haunt me until one day a friend of mine recommended me to a Hijama practitioner. I was skeptical initially but still willing to try. I had a small portion of my head shaved and blood was sucked out from it. The practitioner showed me what what drawn out from my head and I was completely shocked by what I saw.

After the 1st session, about one month later I realised that my migraine problem did not recur. I followed up with my 2nd session few months later.

I was amazed by this curative medicine and I decide to go for a formal training after doing a lot of reading and research. To date since 2009, I have encountered many people with various types of ailments such as stroke, diabetes, gout, arthritis, asthma to name a few and it gives me great satisfaction in seeing them get better
– What particular illnesses/ conditions (if any), do you specialise / had the most experience in?
Most of my patients whom I’ve treated so far suffer from illnesses such as migraines, vertigo, gout, asthma, diabetes, stroke and those suffering from high blood pressure and high cholesterol.
– And do you find that in your experience, the conditions/illnesses that you have come across respond well to cupping (hijama) therapy? And if so, what are they?
From my experience, those who suffered illnesses such as migraine, severe headache, vertigo, eye infection as well as asthma responded well to the Hijama therapy after 2-3 treatments.
– Do you have any interesting case-studies that you can briefly share with us from your hijama treatments?
A recent case which I had a few weeks back relates to one lady aged 55 who suffers from vertigo. Prior to doing the Hijama treatment she consulted a medical practitioner who had diagnosed her condition after identifying the symptom.  She was prescribed some medicine and after consuming it she felt better.  As soon as the drugs wore off,  her problem would recur again.  She was later introduced to me by her children as she could not cope with her condition.  She explained that every time she had pain in her ears, she would throw up and felt the whole world is spinning.  Before treatment I briefly explained to he

r about Hijama and how it works.  After listening to my explanation she was willing to try it out.  I subsequently performed Hijama on the ‘ala mughits’ and had it done thrice.  Two weeks later she had another session after she responded well to the first treatment.  In less than 1 month her children called me to inform me of the good news that their mother does not complain of her illness anymore.  Alhamdulillah.

– Also what would you say about using cupping as a general preventative therapy and how often would you recommend this (once a month? once/twice a year?)
Hijama therapy works both ways, as a curative as well as preventive.  Most of the illnessses that we, humans suffer relates to what we consume daily. The toxins and other pathogens in our blood will react once our immunity systems decline.  As a general preventive measure it is best to have Hijama performed every two or three  months so that the blood can adequately replenish itself.
– As a hijama therapist, how often do you get hijama done yourself, and what for (if any specific condition) and who do you go to to get it done (since it is not an easy therapy to self-administer)?
Usually I get to perform Hijama every month knowing that I have excess uric acid in my blood.
Being a member of a local Hijama group has added advantage as there are many colleagues who are willing to help.
– What is the status and overall prevalance of hijama therapy in your city and in Singapore? Is it available in hospitals and clinics as a valid alternative / sunnah therapy?
Hijama therapy is currently being practised behind closed doors as it is not considered a valid healthcare treatment in Singapore. Sad to say that hospitals and clinics in Singapore do  not recognise Hijama as an alternative to allopathic medicine.
– Whereabouts is your clinic or practice located and what services do you offer?
Hijama in Singapore is practiced privately in the practitioners home.
– Is there anything else you would like to add?

Our thanks to Thaifoddin Othman for sharing the above post. If you have any questions or want to leave some feedback, then please do so via a comment* below.