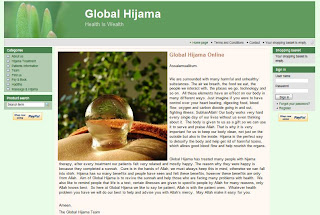 The following is a guest blog-post in the form of a written interview by Ajmul Haque a male cupping therapist from East London, England.

My name is Ajmul Hoque (Jamil) It was about 5 years ago when I first saw one of the brothers at my workplace who had wet hijama done on his head. At that moment many questions were flying inside my head, I was very curious and scared at the same time. I asked the brother “What is that?” He smiled at me and said “It is called Hijama”, to me it seemed like he got abducted and experimented on by aliens. Yes, hijama was strange to me, the brother did not explain enough and left me with a huge question mark.

So I began to research and learn, I was very skeptic, how can taking out blood from a person make them better? How do you know if this blood is bad? Because this is what I heard many times with a heavy voice “Brother, it takes out bad blood.” But how? Is there any evidence? I wanted to learn more, when I found many hadiths about hijama i was amazed! I mean these are angels and the Prophet (saw) telling us to do hijama, as a Muslim i have to believe in this. Which Doctor is better than the Prophet and the angels? To me hijama is a blessing from Allah (swt).

Today we have special advanced technologies that let us study and visualise diseases at a microscopic level. I still wanted to know what science has to say about hijama, I researched and found a registered 6 month certified hijama therapy course (now extended to one year course), where a student must study the history, human body, blood circulation, standard procedure of health & safety and so on. My study has lead me to learn and understand so much about Hijama, and it was practised by many cultures in history. Today it is also recognised as blood letting, if a person’s iron level is high, blood letting helps it to normalise. There are so many benefits the list goes on.

Now I do not want people to think if you lose an arm hijama can help it grow back, there is no evidence of it curing cancer or dangerous diseases. However, it is a complimentary medicine, a detoxification process, it makes sense, the body produces many toxins and pathogens, as a person goes older the immune system gets weaker, making it easy for disease to build up. If you can make it easy for blood to circulate by taking these harmful substances out from your system, your organs will function better. I’d like to think of the blood cells as little soldiers at work, if I can help them by getting rid of harmful toxins it will make their lives a lot easier. I always say to my patients, do you have a bath once in your life and say I am clean forever? No, the body builds up toxins and dirts so you have to regularly keep yourself clean to stay healthy. Just like that, underneath your skin harmful toxins, pathogens and dead blood cells build up and hijama is the fastest way to detoxify your body. People go on to detox programs by eating and drinking anti-oxidant juices and by fasting. In time the body slowly gets rid of these toxins.

I met brother Muhammad who has been practising hijama therapy for a long time, and together we set up Global Hijama. Brother Emranul Hoque is a very close friend of mine who is currently studying Medicine (MBBS) at Queens Mary University. In a couple of months he will be a qualified Doctor as his course is coming to an end. He kindly agreed to support us and help Global Hijama to be recognised and help advise patients. It is important for us to have a doctor on board as many patients will have questions regarding specific health issues, which we therapists will not have the knowledge and answer. Having a Medical Doctor on board means our experience and knowledge as hijama therapists will increase. So this is my brief story on how I became a hijama therapist.

I have experienced muscle pain as I go to the gym a lot. I have developed chronic neck pain and I still have this pain today, but it has calmed down a lot from before as I had to study and analyse the pain myself and found out how I can help this area to heal.

The main cause of my neck pain was of my bad habit of over stretching the neck and making joint sounds, what made it worse is after stretching I will do heavy weights that would put stress on my neck and cause unbearable pain, pain that would last me 3 days like a migraine. I went to the doctor and the response I got from him was “You’re a young person, why should you be getting these pains, take some pain killers, we will do more investigation if it comes back.” No thanks Doc, I don’t want to rely on pain killers, I will use pain killers if the pain gets worse. The muscles in that area were inflamed.

I asked brother Muhammad to perform hijama on me, behind my head just above the neck where the pain was throbbing. As soon as the cups were placed and the vacuum was created, the pain disappeared! Where is the pain? He did not even create any cuts, the pain initiates from the right side of my neck and slowly takes over the rest of the head. Two cups were placed, one on the right and one on the left side of the neck, the right side had dark thick amount of blood in the cup and the left hardly anything came out. I felt very relaxed, after an hour there was a slight pain on the right side so I decided to go to sleep for couple of minutes. When I woke up the pain vanished and I was feeling very refreshed.

So how did the pain go? When the cups created the vacuum it created localised bruising, which activates the defensive cells in your body, when blood was forced to be sucked up to the surface it created blood circulation, which promoted healing. This is common knowledge as bodybuilders would come back on a different day to work out the same muscles, but do light weights and high reps so blood will be pumped to these areas for better healing.

In history in the early to mid 18th century all the way to 19th century cupping was very popular and at its peak, adults with good health from country districts of England were bled as regularly as they went to market. This was considered to be preventive medicine. It depends on the individuals health, some may require to do it every month, every 3 months or once a year.

I try to get it done after every 6 months for my neck pain and generally to detoxify my body. I get it done by one of the Global Hijama therapists.

– Whereabouts is your clinic or practice located and what services do

We are located in East London Swedenborg Gardens E1 8HR and we offer hijama therapy for male and female patients.

Our thanks to Ajmul Haque in London, England, for sharing the above post. If you have any questions for him, or if you have a patient of his and want to leave him a testimonial, then please leave a comment* below.