Cupping Therapy in Shabaan and Ramadan in Germany by Amina Ather

The following is an announcement about Hijama in Germany by Dr Amina Ather, a female Hijama Practitioner in Germany 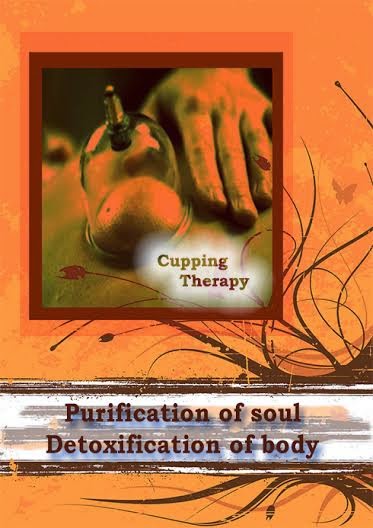 What is cupping ?
Cupping is a non-invasive method to relive local congestion on the external surface of the underlying condition with application of concept of vacuum which is created either by heat or by suction.
History of cupping?

Documentations of its history begin from 1550 BC with the Egyptian civilization and then passing on the Greek region during Hippocrates which further followed towards the east through the Arab civilization by Avicenna and was imbibed with religious inference during the reign of Prophet Mohamed (PBUH) which further fragranced into the silk route and had its roots to ancient Chinese civilization and presently being practise as a modality in traditional, complementary and alternate medicine.
Benefit of cupping ?

There are two types of cupping dry and wet , the benefit of cupping depends on the faith a person in the modality and according to the physical condition of the individual
Religious inference:
It is termed as Hijama (حجامة) which means sucking in Arabic. Cupping is used for the treatment of diseases of the blood, and as a therapeutic measure.
Several prophetic sayings are related in Sahih al Bukhari and in the collection of Ibn Maja, amongst others with regards to the benefits of cupping.
Ibn Abbaas also narrated that the beloved Messenger of Allah (pbuh) said, “Blessed is a servant who practices cupping.
It cleanses the blood, dries out internal inflammations and brightens ones vision.” He (phuh) also said, “Cupping (Hijaama) is one of the best medicines.”
Cupping / Hijama is the best remedy recommended and used by the Messenger (saw).
The Messenger (saw) said, “Indeed the best of remedies you have is cupping / Hijama ” [Saheeh al-Bukharee (5371)].
He also said that on the night of Israa (his ascension to the heavens) he  did not pass by an angel except that it said to him, “Oh Muhammad, order your Ummah (nation) with cupping / Hijama.”[Saheeh Sunan Tirmidhee (3479)]
The best time to get cupping is during 3rd and 4th week of the lunar calendar and most preferred is eight month of the Islamic calendar which is “SHABAAN” this helps the person to prepare for “RAMADAN”
For further details please visit www.cuppinggermany.com
– Dr .med. Indian ( Unani) Amina Ather
Doctor of medicine – Unani Medicine , From Rajiv Gandhi University of Health Sciences and has hands on experience in women health education for last 14 years , with cupping as a part of the health education module in management of life style disorders due to life style changes.
For further information visit www.aminaather.in , or email amina@medizinpark.eu 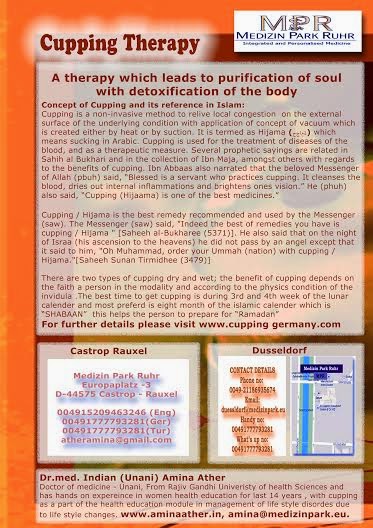 Dr Amina Ather
LOCATIONGermany
CONTACT DETAILS:
Website: www.cuppinggermany.com
_________________________________________________
Our thanks to Dr Amina Ather from Germany for sharing the above post. If you have any questions for Dr Ather or have been treated by her and want to leave her a testimonial, then please do so via a comment* below.
If you are a hijama therapist or patient and are happy to share your knowledge or experience via a guest blog-post like the one above, please send me an email to: hijama.mail@gmail.com.