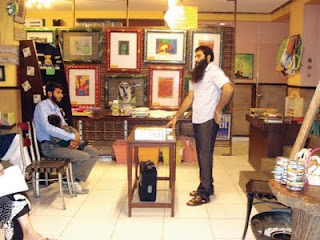 “Cupping: Mind, body and soul” an article from the Express Tribune of Pakistan.

The following article is reproduced from http://tribune.com.pk/story/149447/cupping-mind-body-and-soul with the kind permission of the author.

Disclaimer: The views and opinions expressed in this article are those of the author and / or featured therapist and do not necessarily entirely reflect the position of the publishers of this blog.

Cupping therapy. Ever heard of it? I hadn’t and so I was looking forward to attending a talk on this age-old alternative healing practice. The talk was held in the basement of N’ecos (which has the most amazing French toast by the way). The venue made perfect sense because its basement serves as a ‘natural store’ of sorts, dealing in all kinds of chemical-free organic remedies.

“We support all things natural, and since cupping serves as a divergence from the usual artificially created medicines, we thought why not have the talk here?,” Nilofer Saeed, owner of N’ecos told me. While the owner pointed out that she herself wasn’t sure if she believed in the healing powers of cupping, she thought N’ecos would serve as a good platform for open discussion and raising awareness.

A comfortable group of 10 to 15 men and women of different ages huddled together to listen to what cupping therapist, Mr. Usman Baluch had to say. We were told that cupping, or Al-Hijamah, is an ancient Arab tradition, which was used and promoted by the Holy Prophet (pbuh). It consists of the “application of cups to various points of the body by removing the air inside to form a vacuum,” basically a kind of suction.

The therapy is said to get rid of acidic toxic waste, which tends to accumulate in the human body overtime. In addition to this, Baluch claimed that cupping not only provides stress and headache relief, but that it also cures blood pressure problems, athletic injuries, kidney failure and even Parkinson’s disease. Extolling the virtues of this technique, Baluch claims he has successfully managed to reduce a patients’ blood pressure by the use of cupping in the short span on 15 minutes. And in the case of Judy, a Parkinson’s patient living in Australia. “She was unable to walk,” he told us, and “in 15 days she was 70 percent cured”.

So are any of Pakistan’s glitterati cupping disciples? Baluch mentions designer Maheen Khan and actress Zeba Bakhtiar as numbering among his clients. That’s when Nilofar chipped in to say that Zeba looked “fabulous” the last time they met and gave the credit to her cupping sessions. “That’s when I realized that cupping is all the rage,” said Nilofar. “I’m not sure I’d go for it but Zeba looked terrific and I wanted to make people aware of this alternative healing method.”

Another fairly young girl told me that she and her mother had both gotten cupping done, and that it had given her a lot of “positive energy and mental rejuvenation.”

Mr Altaf Ahmad Paracha, also had a story to tell: he had tripped while performing ablutions and had badly injured his foot, which not only caused him severe pain but also took away his ability to walk. He spent 45 days going to doctors across the city but nothing helped. He then decided to try cupping and went to his local mosque where they performed the practice free of charge. He told me that three incisions were made on his foot, a process called wet cupping. I asked him if the idea of someone cutting up his foot outside of a hospital setting scared him, but he laughed and said “it was sunnah, a practice endorsed by the Prophet. There was no reason to be scared”. In ten minutes he was completely healed and managed to walk back to his car.

The small audience actively participated in the question and answer session that followed Baluch’s informative presentation.

Can it cure cancer?” someone asked.

It’s all about the mindset. You have to have faith”, Baluch replied.

“Can it get rid of stress?” a lady asked.

“That’s something very mamuli (Urdu for: “minor”),” he replied, laughing.

“What about obesity?” another girl asked. Baluch replied saying that he had helped a man reduce two belt sizes in a span of just one week.

“Of course he was given a diet plan in addition to a cupping session,” Baluch told us, after seeing our shocked expressions.

Interestingly enough, cupping isn’t just a practice that is endorsed in this part of the world — Western celebrities including Gwyneth Paltrow, Victoria Beckham and Jessica Simpson have all tried it.

Our thanks to Br Usman Baloch from Lahore, Pakistan for sharing the above post. If you have any questions for Br Usman or indeed have been treated by him and want to leave him a testimonial, then please do so via a comment* below.