Subtitled:
Understanding and Protecting the Ancient Art of Hijama Therapy

Author: James M McConnell, who is reputed to be a highly trained and experienced practitioner in traditional Hijama therapy in Syria, and has been credited as being one of the first (if not the first) to bring Hijama therapy to Western and internet audiences (http://www.brokenearth.org/Hijama), and who received an Ijaaza (permission / authority from a Hijama teacher) to practice Hijama in 2003.

This books central argument is that Hijama is a religious practice and is not the same as cupping. If you don’t have Ijaaza (which can roughly be translated as permission/ authority) to practice Hijama from a previously authorised Hijama master whom you train under as an apprentice, then you are practicing cupping and not Hijama, such chain of authority going back all the way to Prophet Muhammad

This is yet another part of the debate that often rages in the field of Hijama and an earlier post on the same topic generated many varied views and comments :

Who should perform Hijama?

While not everyone will agree with the central theme of this book, this 129 page book provides an all 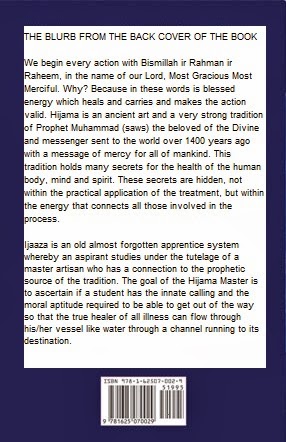 round overview of how traditional hjiama is done, and some plausible theories of how it works and  how it fits in with the problems and challenges of the modern world, as well as provide other holistic advice that can help us take charge of our health like living a simple life and eating slow local foods. It also highlights a few spiritual aspects looking at Hijama from a religious perspective, and discusses the importance of things like meditation and charity as forces that can also have an impact on health, but is something that is perhaps not so well understood and appreciated nowadays.

A chapter on how Hijama is performed in the traditional sense highlights a environment friendly method of performing Hijama as well as the traditional points used for Hijama, and one of the final chapters touches on what impact the gravitational effects of the moon might have on the fluids of the human body (just like the moons effect on the tides) that would have some implication on choosing the best days for having Hijama therapy.

So while the book does not claim to be a medical explanation for Hijama nevertheless, the book we feel is worth a read for the following reasons:

PRO
– Author seems to be well-versed and experienced in traditional Hijama therapy
– The book covers many related issues in the modern western world, which make a good case for why Hijama (as a detoxing method) might be more relevant than ever in todays world given our current diets and lifestyles and potentially toxic environments. So some sound holistic advice is also given in this book which if taken on board may greatly enhance the detoxing, health-maintaining and treating effects of hijama therapy

CON
– The book is not a medical book, and is not intended to be, (and therefore has a standard medical disclaimer stating that the book is not meant to replace medical advice), so if you are looking for detailed medical explanations of how hijama is used for lots of different medical conditions, this is not the book, although there are some plausible theories suggested for how for example hijama may be cleaning out the cardiovascular system, and how it may have a role better oxygenating the human body.
– While the book does explain the process of the Hijama procedure as done within the Ijaaza system it  book is not a manual to learn hijama, and again not intended to be, as the author’s central point is, Hijama can’t be learned from books (which many will somewhat agree with), but by practical application within an Ijaaza apprentice system

Conclusion:
While this book’s central theme may not be agreeable to everyone, this book gives a good viewpoint of Hijama as seen by the traditional / religious therapist. The author touches on the spiritual aspects of learning hijama and learning in general which is, as he claims in many places, almost completely lost in today’s secular, material world

For our first book-review, this book gets a 7.5 out of 10. If you are a Hijama therapist or enthusiast and the issues mentioned above are of importance to you, then read this book, even if you may find that you don’t entirely agree with all the points and claims made therein, nevertheless the author’s knowledge of traditional Hijama and his many years practical experience gives invaluable insights to the topic of Hijama therapy as potentially applicable in today’s world.

If you liked this book review, leave your comments below, and let us know if there are any other Hijama related books you would like us to review.

Our thanks to James M McConnell for allowing us to review his book. If you have any questions or want to leave some feedback, then please do so via a comment* below.

If you are a hijama therapist or patient and are happy to share your knowledge or experience via a guest blog-post, please send me an email to: hijama.mail@gmail.com.