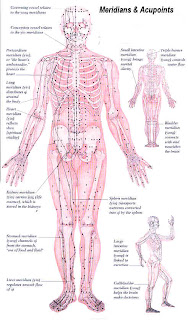 A HEALTHY Chinese New Year from Ahealth.co.uk!… as we look further at the links (and differences!) between Hijama (Cupping) and Acupuncture

A Happy Chinese New Year of the Ox to all!

As mentioned in a previous post, I was surprised to learn that cupping (hijaama) and acupuncture seem to be linked in some ways. At the same time there seem to be some major differences!

So as a comparison, I will now attempt to list in simple terms, both the similarities and the differences as I (an ordinary Joe Blog(!)) understand it:

SIMILARITIES BETWEEN HIJAMA AND ACUPUNCTURE:

1) Both therapies are classed as ‘alternative’ therapies not understood or recognised by ‘conventional’ Western medicine.

2) Both hijama and acupuncture seem to be using the same Meridians and Acupoints Charts (see image).

3) Therefore, both therapies believe in the strange Meridians-in-the-Body Theory where ‘invisible’ energy is supposed to be flowing.

However I think that’s where the similarities end (if you know of any more, please leave a comment). So now for the differences:

DIFFERENCES BETWEEN HIJAMA AND ACUPUNCTURE:

1) First and foremost, and the most obvious: Hijama is Arabic / Muslim, while acupuncture is Chinese.

2) Hijama involves removing ‘bad blood’ (ie a detox) from the body by using suction cups on incisions made around the acupoints while acupuncture involves inserting needles on the acupoints to manipulate and fine-tune energy flow in the meridians to rebalance the energy in the body.

3) Preferred or optimal time to have hijama therapy is on or near full-moon (ie on or around the 15th of the lunar calendar), which seems to be related to the effects of the moon’s gravity on the body (ie hijama works best at full gravitational pull of the moon on the body, which we as humans don’t normally feel in our day to day lives). There are, as far as I am aware, no such indications for acupuncture.

Once again, anyone have anything to add to this, please leave a comment.

So in a nutshell, hijama is like an oil-change of the human body, while acupuncture is, well, maybe a bit like fine-tuning the spark-plugs of a car’s engine so they spark at the right time and provide optimum energy for the running of the car (sorry unless you are into cars or a mechanic, this may not make much sense to you!). In a similar way, acupuncture is supposed to fine-tune the energy flow for the optimum running of the human body.

If you want to know more about how both these similar-yet-different therapies are supposed to work on the human body (and IF they work!), then please leave me you first-name and email address so I can alert you on future posts, as I have made it my personal mission to find out.

Peace & Health until next time!

PS: Next time, I am hoping to do a post titled: “An Introduction to Hijama by a practising therapist” which will actually be, as the title suggests, a guest-post from a practising Female Hijama Therapist called Umm Husamuddin. So watch this space.